In this activity we ‘explore’ the urban water cycle and we learn what sustainable water management within a city is all about.

In this activity you will:

Notebooks and pens, photo camera (or a cell phone to take photos)

Three water systems in a city

Cities are big consumers of water! In most cases its water is transferred from far away. This way its water “inflow” relies not only on precipitation in the surrounding areas but also in others from where the water is transported to the city.  After being collected, water is treated and distributed through an underground pipeline network, the water supply system.  Apart from river dams, lakes and reservoirs, precipitation and groundwater the water supply system may rely on seawater through desalination hat is the case of many arid areas, such as the Mediterranean islands.

On the other hand, the city returns water (after its use by houses, offices, shops, hotels, etc.) as wastewater. Wastewater is progressively recognized as an alternative (non-conventional) water resource after its treatment and under controlled conditions.

In a city, when rainwater is not absorbed by the soil usually drains into the rainwater drainage system. This is a network of channels and pipelines ending either into a river or the sea. This drainage system needs to be properly designed and maintained so that the city does not flood. The large amount of sealed surfaces (e.g. streets, highways, pavements, buildings, etc.) block the rainwater from being absorbed, reducing and enrichment of the groundwaters.

In this context, there are three systems that are crucial in how the urban water cycle operates: water supply, wastewater and rainwater drainage system. 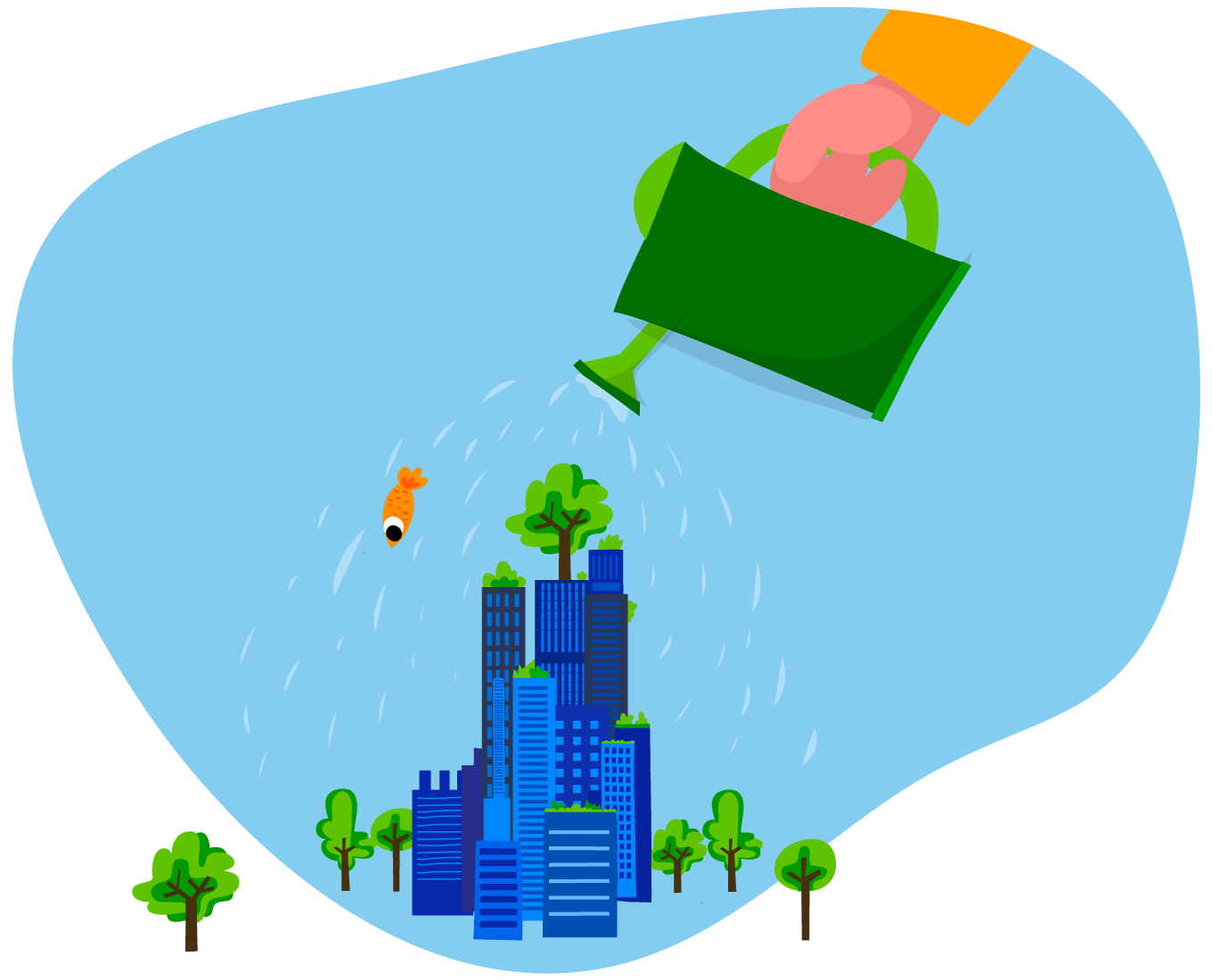 Observe the pictures and choose the system they belong to (supply, sewage or rainwater drainage).

It is a water reservoir (big tank) that we often find in a city.

It is a grid of the rainwater system.

It is a lid of the sewage system. Openings and lids are needed to provide access to the system i.e. in case of emergency, for maintenance, etc.

It is a dam collecting and storing water.

It is part of rainwater system that drains stormwater and may prevent the risks of flooding.

It is a secondary (settlement) treatment tank found in a sewage treatment plant.

The rainwater at the road sides passes through a channel with a slight inclination and waters the flowerbeds.

Drag and drop the labels that refer to processes of the water cycle as well as to activities related to water management.

Water management in a city

In cities, population and water demand is concentrated to a relatively small, dense area. This concentration increases the pressure on the water resources. Water management in a city should assess the supply and demand relation and to reduce the impacts of urbanization to the natural water cycle. The study of water supply and demand relation, the promotion of  water recycling, the handling of leakages, the maintenance of water infrastructures are among the tasks of a Water Services  Company.

So in a city, sound water management means:

Thank you for your answer!

Do you know about grey water? if you want to remember what greywater is

Wastewater treatment if you want to remember what black water is

Go back to the homepage!

Let's discover the story behind the old fountains, cisterns and aqueducts of our town!

What is the "urban water cycle"? Which are the important aspects of water management within a city environment?

In this activity we learn what a water drainage basin is and why it is important for the experts to study it.

Let's find out how sea and brackish water can become a freshwater resource!

How a greywater system is installed? Let's find out!

Let's find out what "greywater” is and how we can use it!

In this activity we learn about how wastewater is treated and what we can do with the treated water.

What are the various types of rainwater harvesting systems? Let's find out more about them!

Can we collect rainwater? And how do we use it? Let's find out!

What is our water footprint and how can we reduce it?

What are the main sectors contributing to climate change? What are countries doing to address it? What can we do for climate collectively at school and at community level?

We discuss the greenhouse effect and the greenhouse gases, how climate change is linked to our lifestyles and ways we can cope with it on a personal level.

Lt's discover the water resources of our region.

Let's travel within the water cycle!

Let's see why it is important to know about water in our region.